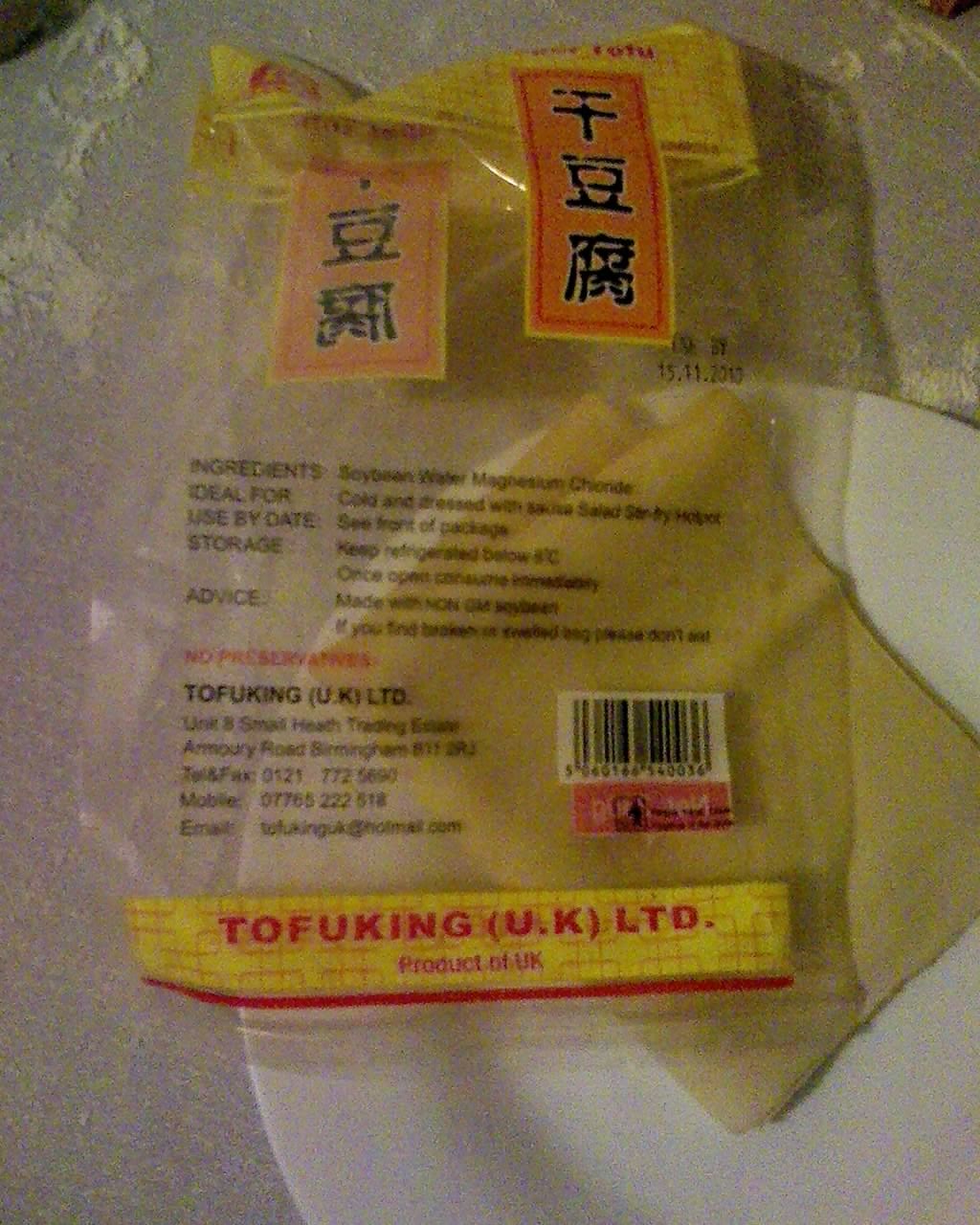 Bought this gan dou fu from China town the other day.

Have been trying to find this for ages, and it’s nice to see something made in the UK for once, but at £2.99 (30元) a pack it is very expensive indeed.

What caught my attention though was the English name on the pack,  I couldn’t help but laugh at the rather unfortunate name of the manufacturer…

Seems someone needs to find the space key

I’ve  Just signed up for a 100 mile cycle ride around Essex,  in aid Action Medical Research, a great children’s charity dedicated to improving the health of babies and children in the UK.

I’ve never cycled this far before in one day, I just hope I don’t pass-out from fatigue or get hit by a bus

Saw these in the shop the other day – reminds me of a Chinese version of the battery powered fork. And at £1.50 (10.5元) a set, somehow, I don’t think it will catch on. 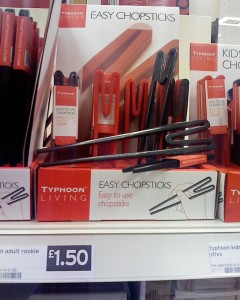 And before you ask 我会用筷子 🙂

Somehow my FTP password was hacked and this bit of JavaScript was inserted into all of the index.php files that run this site!

I found out through this email from Google – glad they told me as otherwise I may not have known!

Apparently this hack is a virus which uses stolen FTP password information then injects this bit of code to pages on the server without you realising it.  Where they got my password from I’m not sure, though I suspect it might have been my old work machine.  :reallypissed:

END_OF_DOCUMENT_TOKEN_TO_BE_REPLACED

Just been reading that in London if you earn the average salary and have a £25,000 deposit you can buy a £100,000 based on 3X Income multiple for your mortgage.

This means anyone on the average salary fortunate to have £25,000 in savings can only afford a £100,000 place in london.

Slight problem with this is that unless you wish to live in a ghetto or a camp site, 100K will get you very little indeed. The average price of property in London is  £348,585.  :disdain:

Managed to find some content from 2004 that I thought was long gone through the Wayback @ archive.org!

This is a website that archives content from the web and stores it as it appeared, based on periodic scans by the archive.  It seems to have omitted the images from my sites but has captured all the text. 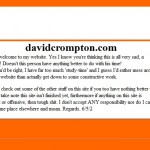 from original site in y2k!

I had a server issue and lost lots of entries from late 04, but now I’ve re-inserted them via my SQL directly into the DB behind this blog  – so you’d never know they went missing in the first place!

Also found some really old stuff from 2000 from my first webpage and some Northumberland road stuff that I thought disappeared years ago! 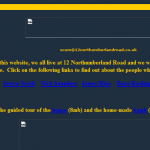 Like many others, I’ve spent ages trying to get Microsoft to show websites correctly and actually be able to read and write Chinese characters on a non-Chinese version of XP.

There’s bits and pieces on the web on how to overcome this but I found them not so useful (especially as I don’t have the installation discs to hand for Chinese character support or ahem.. am running a pirate installation…:-P)

Unfortunately you have to have admin rights to be able to set up Microsoft IME via the control panel and be able to write characters using the MS pinyin imput method. You also need admin access to be able to change windows so it defaults non-Unicode programs to use simplified Chinese – if you don’t do this when you load QQ all you see is squares…

There is a way around this if you don’t happen to have admin access to your machine i.e You’re at work . You can install NJStar CJK Viewer .

END_OF_DOCUMENT_TOKEN_TO_BE_REPLACED

I got to try one of these out the other day, It’s a Sony ebook reader which is meant to be the future for digital publishing. It’s really slim and about the size of a paperback and can hold over 100 books on it depending on the size of the hard-disc.  I work in digital publishing so hear a lot about these things and how they will revolutionise everything but I’m not so convinced ?:-)

Granted It’s very clever and lots of design has gone into the screen which looks as crisp as I’ve ever seen a screen – apparently it uses real ink to make it look more like a real book.  Having said this I am yet  to stare at it for hours on end in order to see if my eyes hurt just as they do when you look at a computer monitor for too long. ..The battery life is almost endless with 7500 page turns before it needs changing.

I do see the advantage of being able to have 100 books on one reader, for students it could be a very useful resource and would alleviate the need to have textbooks for everything. For the traveller who can’t get editions abroad, they could have all the books they ever want stored in one location.  So for a select few it could prove to be a very useful gadget to have.

The problem is that at the moment there are very few e-format books that can be bought and downloaded from the major publishers. And so part of what I’m doing in my current job is to help get all the titles converted so they are available in E format.

As you’ve probably guessed, I’m quite cynical about this.  I don’t really think many people (beyond those in digital publishing!) will go out and by one of these devices with their own money. Firstly they’re really expensive, £250 is the figure going around, just for the reader – then you need books and they cost the same price as the print equalivant!

END_OF_DOCUMENT_TOKEN_TO_BE_REPLACED

Some pics from the snow this morning.  I’ve haven’t seen this much snow fall in London since I was about 5.  It hardly ever snows here and when it does it seldom gets cold enough to settle in the city. 🙂  Perhaps the rareness of it all has caused everything to temporarily shut down…

There must be 3 inches at most, but there are no trains and the buses have all been cancelled on ‘health and safety grounds’.   I daresay in the summer when there’s

a coupe of days with +30C temperatures, people will be dying from sunstroke, hosepipes will be banned and trains won’t run ‘because its too hot’.

It Just shows how useless people in the south of England are at adapting to different types of weather.

Other countries with far fewer resources at their disposal manage just fine. Afterall, the roads in Changchun are frozen for 3 months of the year

but they manage so much better than people do here, and on far fewer resources.    The media gets into such a hysteria over it all, making the situation worse than it really is.  Perhaps they just want something to report on?? ?:-)

did actually try to get to work and started to walk the 6 miles or so, but I turned back and gave up as I was  constantly thinking  ‘who else in my office would bother walking this far to work‘ .   It’s cynical I know, but why bust-a-gut when you know that no-one else has bothered and you’ll get paid regardless….

In a better place  people would be rewarded for getting into work in such situations or simply would not get paid for not being there.

No excuses!   I’m sure if this was the case then most people would find a way into the office, I know I would!

Perhaps one day, people on this little island will learn to get on with life when the weather isn’t overcast and grey, (aprox 50 days per year) though I feel this will take such a seismic cultural shift, I doubt it will ever happen in my lifetime.

It’s just my luck that now I’m working in the UK they value of the Pound to Renminbi has fallen over a third in a little over 3 months. It always used to be around the 15yuan to 1 pound mark, so that 100 yuan was about 7 pounds or so. :clown:

But now 100 yuan is worth less than 10 pounds…I saw a dodgy bureau-de-change in Chinatown offering 8.9 to the pound!! :no:

This makes China suddenly seem that much more expensive! Exporters must be feeling the pinch with this kind of strengthening in RMB – Likewise Chinese salaries don’t seem as poultry as they once did. Personally, I don’t think the Pound will get back to 15 anytime soon, with interest rates here being so low and the economy apparently about to implode… As long as the Yuan is pegged to the US Dollar, and the Pound stays weak against the Dollar this will continue.

Don’t think I’ll be going back to China until the exchange rate gets better! :beatup: 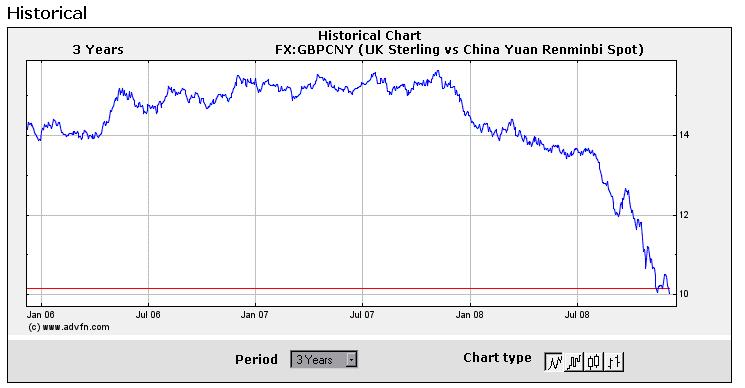