So been back 5 days or so, still getting used to things around here. It’s exciting and different, Will take quite a while for it to all soak in, I think. Not really sure what to think, still processing it all…
But one thing is certain – It’s one thing going to a new country to live for the first time, quite another coming back to your home country after a period away.

I have begun to realise just how developed things are in the UK and also how comfortable people live their lives. It is very affluent here, people are less concerned with the harsh realities of life, things like TV and popular culture seem more important. I think It is very insular here. I believe there are many problems here caused by people generally having too much money.

There are no real poor people here (In comparision to Changchun), signs are everywhere telling me what I can’t do, even though It’s plainly obvious… A total dependence on cars, pre-prepared meals, instant gratification, buy now pay later attitude – Certainly different from what I’m used to!

Other striking thing is, of course, language. Interesting use of words , interesting pronunciation, lots of dialect and slang – indeed I would say that even the best students that I had taught would find it very difficult to understand most people here.
I feel as if things have changed since I’ve been away, but It could just be me! I’m not sure.

Things are clean, ordered, regimented, and I think after a while this will be a little boring from my perspective!

Life may be better in many respects here, but it is I think it is duller because it is so much more predictable – which is probably a good thing in many ways.
I guess If you never leave here for a while, you’ll never have the chance to even see things from another perspective and that surely is a bad thing, just takes a while to get used to things again.

Ah , this computer cant read hanzi so here’s an english post:
some initial thoughts I wrote aftewr just getting back-
The Smell, no people, accents, langauge, different skin colours,  no characters to read, expensive, coins,  signs telling you what you can’t do everywhere, fat people

I almost certainly shall never live in Changchun again, when I return to China it will be elsewhere. Despite what people may think, this is a good city to live In, It is a nice place and I’m certain I shall miss aspects of my life here once I’m back in the UK. 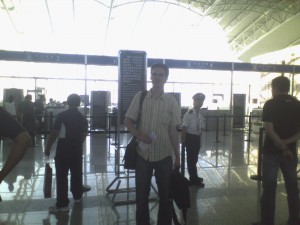 Final photo in at Changchun Airport

Having read through much of my blog in recent weeks, I think that If I had read this before I came to Changchun I probably wouldn’t have come!

I want to say, that there are of course pitfalls to coming here to work, but, by and large it has been a really positive experience. I have enriched myself and have many new life experiences – which If I had never come here – I am certain I would never had the opportunity to have.

Even In bad times, I have never regretted my decision to come here and I think that speaks for Itself.

The experiences have allowed me to develop thoughts on new things and have given me a sense of direction that I previously never had. Furthermore, It has also given me an opportunity to focus my understanding not just of other peoples, but more profoundly of myself. I have adpated to various situations and have been able to solve many problems that have come up in my daily life, this also makes me feel better as a person.

For that I am very happy.

再见中国！
我会永远铭记。。。。
It’s been fun, but all good things must eventually come to an end…
再见长春。