Well I thought this was cool anyway… Scans your blog and pulls up the most commonly used words (excluding the obvious ones) to produce this montage of words! 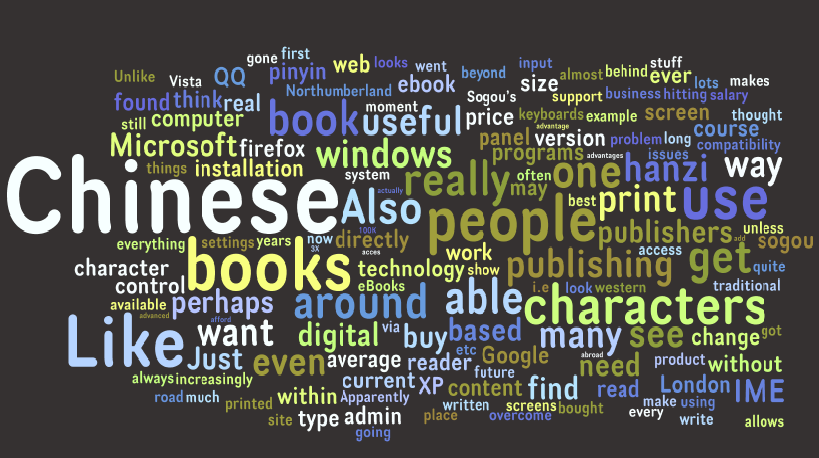 In Changchun two years ago not many people had heard of snooker beyond a few hard-core fans.

Many people would use the words 台球 taiqiu or 桌球 zhuoqiu (literally means table or desk ball, but really means pool) and others would call snooker 大台球 dataiqiu as the table is bigger than a pool table.

This is a good example of how an English word has been assimilated into Chinese, as it’s simply a phonetic translation from the English name .

Infact if you say ‘snooker‘ in Chinese, it sounds like saying the word with a chinese accent or trying to say the word when very drunk. So Sinuoke 斯诺克 , like qiaokeli 巧克力 (chocolate) bailandi 白兰地 (brandy) and many many others – especially names – has its roots in English. The reverse is also true for words such as: feng shui, chow mian, kung fu, tofu and the the phrase ‘long time no see’

I’ve spent many a time explaining that it’s a different game from pool and last week some of my students started to talk about it to me. They said that it’s popular TV sport but that not many people actually know how to play it, or know what it is beyond a name. I then explained the rules. There is no doubt that snooker is fast becoming popular in China, especially with young people and I’m willing to bet that the next generation of world champions will be from China.

Perhaps the biggest reason behind this is a Chinese player calledd 丁俊晖 dingjunhui who is the first half decent player from China to break into the professional game. The Chinese love sports superstars and it’s seen very much as a part of national pride and that is a good thing I think. Also for the first time (and to my delight) the world championships is being shown live on CCTV5. 🙂

Even in Changchun there are now quite a few new places where you can play not only pool but snooker as well. What put me off before was the smoke and the seedy atmosphere some associate with these places, but things have changed. Where I play there is no smoking and the cost is around the 10 yuan an hour mark, though it can be as little as 4 and as much as 50, depending upon where you play.

Here’s some of the downloads that I promised earlier today. There are many more still to be put online, but I am having problems uploading anything larger than 2mb.