Been working hard. Time has been going so fast recently, have got into the 9-5 routine which isn’t great, but the work is good at least.

Still find myself taking pictures of London walking to work, at lunch and coming home even though I Spend most of my time in an office looking out over the Thames.

Kind of feel a bit like a tourist at times, anyway…

What a total joke the torch relay is.

I was in London as the torch procession went through, and I was appalled at how big a police operation was needed just to let 1 person carry a rather small torch through a stupidly long route of 31 miles around London.

Politics aside, whoever made the go-ahead for this torch-relay through London should be out of a job.

It apparently cost the UK taxpayer 1 million pounds (1400wan) just for the policing operation – money which I pay was spent on this is a total disgrace.

Perhaps the bill could be sent to the organising committee of the Beijing Games – why should my tax go into such an event???

The government here is so afraid of upsetting the Chinese government viz-a-viz the Olympics simply because the 2012 Olympics is here in London. They realise that any action taken by them that is seen to be negative by the Chinese, will probably result in tit-for-tat reprisals in 4 years time. How pathetic. It’s only a sporting event – if anything else caused so much fuss and budget overun they would cancel the event, but because it’s the Olympics every rational thought is removed from the equation. 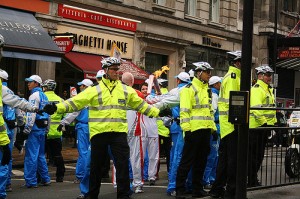 Personally I don’t care what anybody ‘thinks’- it’s a simple question of wasting taxpayers money on an un-necessary and pointless event.

I have the feeling that this is the tip of the iceberg and that this is just the beginning of billions of pound of taxpayers money being thrown into the Olympic black-hole. No-body really actually know the full price of hosting such an event, or whether it is finanically a goer – the only certainty is that those that run the Olympic movement -the IOC (an unaccountable bribe-taking group of degenerates) – are lining their own pockets.

I don’t believe why many people that say sport and politics are separate – who are they kidding?

I can only think they must be incredibly naive/bordering moronic. When you have people representing their respective countries in an international event then the two will inevitably overlap.

Personally I don’t actually understand why there is a torch relay anyway? Apparently It’s a tradition started by Hitler and the Nazis in the wartime Olympics- so why is it still continued??

I think the answer is that the people behind the Olympics – the very powerful and corrupt IOC – think that the greater the publicity and build-up to the event, the more money can be made though endorsements and merchandise and the like. It’s all about corporate business being able to associate their name with the globally recognised olympic brand and make more money through exploiting this.

At the torch relay in London there were Beijing Olympic flags being given out and these long blow-up tube things that are used to make loud noises when hit together. On the reverse side of the flags wasn’t the Olympic logo, or even the Chinese flag but a large black image saying – SAMSUNG…

For those particularly nationalistic Chinese that think the Olympics is about China’s coming of age from it’s ‘peaceful rise’ – my opinion is that is only a footnote.

It’s more about western big business having a platform to advertise to a massive -as-of-yet, un-tapped market. To publicise and market it’s brands to the 1.6 billion Chinese that present a massive business opportunity in the next few years. To put this into perspective – there are about 300 million people in the US and about 500 million in the whole EU – the potential in China is massive.

I believe It’s also about those powerful people that run China doing deals and making lots and lots of money on the back of the Olympic brand. The whole nationalistic idea is a smokescreen for the true purpose of the games. Oh yes and there is a sporting event too.

If people in 4 years criticised the British government about some human rights abuses and there were protests at the London games, I can bet you that British people would not necessarily see it as a slur on their country and national identity as the Chinese have.

Here the government is separate from the identity of the country; in China it is not. To a huge extent, the communist party is China – you say something bas about the Communists then you are a threat to China.

It’s interesting reading some of the stuff you see in the UK Press about China – it almost all has negative connotations. Very few positive stories make the cut. Is this because there is are no good things to report in China? – of course not, but those are usually not so interesting stories for the viewers- plus news shown on TV here is usually negative by nature.   Just watching the BBC the other day the lead story was that ‘China is now the World’s biggest polluter’.

The coverage was ever so melodramatic, as if a milestone has been passed and that the end of the world is near and through implication China is now to blame for the most of it.   Yes the Chinese are big polluters, but the west has been doing it for more than half a century.

For me this story was re-hashed old news and I don’t see how it could be justified as the top story on the evening news – so its no wonder when you talk to a westerner about China the first words they say are words like pollution, power-stations or human rights.

I think that people generally believe what they are fed on the news or at least subconsciously absorb the information without thinking about it. Just as the people in China are fed a news-diet of censored government propaganda, in the UK the news organisations also have their own agendas. The problem is that if a story has a potential to be sensationalised and people can relate to it through images, then it sells more papers, gets more viewers. And that’s what the bottom line is.

I’ve read lots of Chinese news sites showing articles with Chinese people getting annoyed about what’s been shown on CNN, the way it’s been sensationalised and some of the particularly dull commentary made by it’s journalists. I think Chinese people have to realise that CNN is simply sensationalising the story in order to capture more viewers/ appeal to their viewership (ie. lowest common denominator /not very thinking people ((mostly Americans in this case)) ) – something that American news channels do as a matter of course.

This is nothing new. 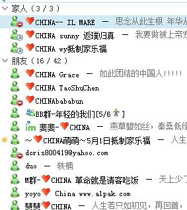 Whereas in China people are much more nationalistic and proud and therefore more sensitive to criticism (right or wrong) of the state and see it as an affront to the dignity of Chinese people. In the west we are used to hearing bad things said all the time about our country, In China you are you not.

This is in-part due to people in mainland China only ever reading and viewing what the government wants them to read/see i.e never any bad news about the Communist party – unless it’s scapegoating an individual as a means to show how the party is weeding out those so called bad apples!

There is also a slightly sinister side to this I think; when the political might of the Communist party gets behind the whole ‘China’ issue and propagates it’s view of the situation to the people.  The Chinese are very fast to jump on the bandwagon – and I would have to say If the object of their derision is non-Chinese (i.e foreigners) It is very easy to whip-up those people into nationalistic frenzy.

I witnessed this kind of reactionary behaviour during the Japanese textbook row erupted a couple of years ago. Many Chinese were incensed and threatened boycotts of Japanese goods and all sorts of other punitive actions-  But what actually happened was nothing. When it came to the crunch people were not willing to fore-go their JVCs and Toyotas.

The whole Tibet argument is not something new, it has been around for decades. Everybody in the west knows about China and it’s human-rights recordm- this is also old news.

My opinion is that this is not as clear-cut as many of the protesters like to make out, bad things go on in all countries – just they are better at keeping it secret in the west.  In my opinion  western governments have very little moral high ground, if any at all to lecture the Chinese.

It is only now that the stuff in the Chinese media has started to show less towards foreigners and more direction it at the ‘dalai clique’ (who incidentally don’t even want independence for Tibet, simply the ability to run their own affairs within a region of China like Hong Kong) – even the communists know that it’s western business that makes the Olympics what it is, and for all it’s rhetoric, Beijing wants a smooth Olympics at all costs.

There is a problem that I think the Chinese authorities have with the Olympics – for all the great economic and social achievement over the last 20 years, China is still miles behind when it comes to liberty, the rule of law, freedom of speech and ultimately, human rights. In a sense it has developed socially and economically but not politically – 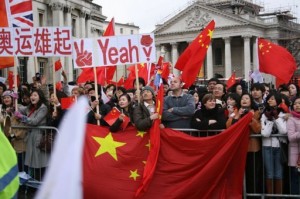 within China this poses no real problem but to some in the West this poses serious issues.

The huge irony in seeing so many pro-china protesters (mostly rich Chinese students) on the streets of London the other day, is that in this country (for now at least!) you are allowed to protest, to show your opinion peacefully – even if the government does not agree with it.  In China you cannot.

[youtube=http://www.youtube.com/watch?v=I1bZ4sp5K04]
Not everyday you see this from work!  Made my day .